Recline with a cup of coffee on our Harbour Heights terrace and imagine the sound of flying boats landing, and the rich and famous schmoozing around you…

As unlikely as it may seem, at the height of the Battle of Britain Poole Harbour became a major international airport – the UK’s Flying Boat Hub for civil aviation with British Overseas Airways Corporation (BOAC). Previously stationed at Southampton, due to the imminent threat of attack Poole became the proud home of the flying boats and the only connection available by air with the rest of the world.

With its wide open space for takeoffs and landings and sheltered, relatively calm and smooth waters, the harbour made an ideal base for the flying boats. Five runways peppered the harbour, with the main flying boat runway stretching an impressive one mile long between Brownsea Island and Poole Quay. The main aircraft moorings were stationed near Salterns and air traffic was controlled by vessels moored off Brownsea Island.

Amongst the hubbub of normal harbour life, you would have seen commercial aircrafts such as the Empire C-Class Flying Boats and the large Boeing 314As. A very different picture to the one we have today! The BOAC flying boat service provided vital passenger links to Europe, Africa and even Australia. With over 650 jobs created – everything from aircrew to baggage handlers – BOAC became one of Poole’s biggest employers, giving the area a much-needed boost in what were uncertain times. 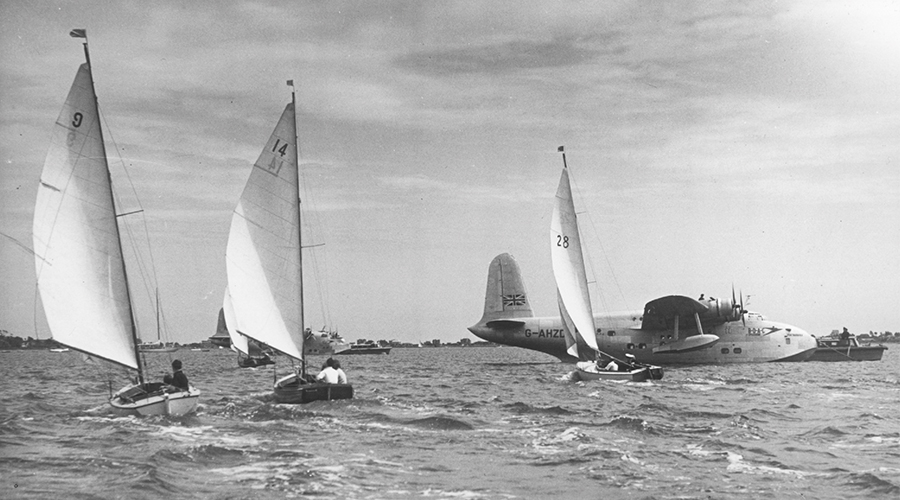 The flying boats offered a luxurious, ‘silver service’ way to travel, with only VIPs and the wealthy having the privilege of getting onboard. Because it was a global service, it brought a variety of passengers into our humble harbour, from military personnel and government officials to businessmen, entrepreneurs, entertainers and celebs. Even King George VI and General Charles de Gaulle were amongst the celebrated passengers, not to mention an unusual guest from the Far East – the giant panda, Lien Ho, who was destined for London Zoo.

During this time, the Harbour Heights hotel became the favoured overnight accommodation for the rich and famous passengers, who would enjoy a night by the water’s edge before being transferred to the departure lounge at Salterns. Non-stop trains brought them from London to Bournemouth, their three coaches blacked out to preserve the identity of those inside. And in the early days, a Rolls Royce would be on hand to bring them from Bournemouth to the hotel – a grand entrance indeed!

On 30th March 1948, Poole’s spell as an international airport ceased when BOAC transferred its operations back to Southampton. The buzz of aircraft was once again replaced by the hum of motorboats and flapping of sails – the harbour melody we now know and love. But Poole’s heyday as an international airport has certainly not been forgotten – the Poole Flying Boats Celebration has kept the memory alive, and will do so for generations to come. 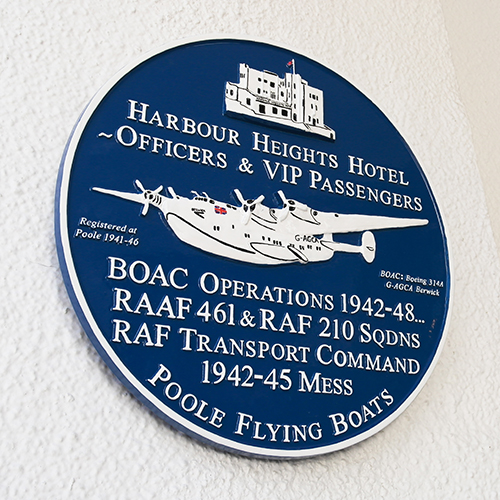 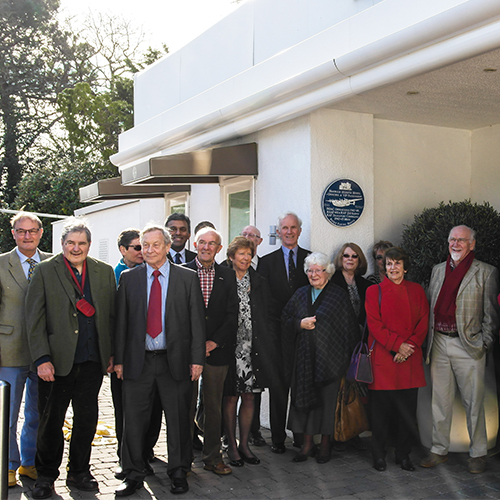 On 10th March 2016, Harbour Heights Hotel took great pleasure in revealing their very own English Heritage ‘Blue Plaque’ linking this hotel with the Flying Boats based at Poole Harbour. The hotel housed many famous and heroic men and women pilots, and their passengers, during wartimes and less hostile years.

Get on our grape vine for the latest news, exclusive offers and upcoming events. We promise not to clog your inbox, but we’ll give you regular updates.